So in this month's news... the last mod standing, who had just demoted all of the previous mods of the sub a few months ago (read about that here: https://www.reddit.com/r/nerdcore/comme ... tor_purge/), basically quit and locked out new posting recently, essentially casting the sub into the annals of reddit hell. He seemed like an okay dude, always responded when I messaged him.

I suppose we'll never know why he walked away and took the keys with him. He probably got tired of bossy members inundating him with messages telling him who to ban, what to delete, and... basically how to run the sub.

Karl Olsen, of bad auto-tune singing and electronica nerdcore fame, tried to formally petition that mod access be granted to... himself...

... and was promptly handed a "thanks, but no thanks" from the Reddit Admin Team: https://www.reddit.com/r/redditrequest/ ... re_as_the/

UPDATED 7/14/21: Longtime nerdcore artist(s?) "formerfatboys" nominated himself, but received a denial from the Reddit Team concerning his request for modship of the sub: https://www.reddit.com/r/redditrequest/ ... e_no_mods/

UPDATED 7/16/21:Even more recently, Reddit account holder "C11H17N2O2SNa" attempted to solicit mod control for him/her/it-self, but was denied the position by the Reddit Team: https://www.reddit.com/r/redditrequest/ ... have_been/

That's three for three, each and every request to mod the sub has been denied. Is it the case that Reddit wants the sub to die? This could be the case, given that there is at least one other nchh sub up and running. Will someone else put in a formal request now to mod the old nerdcore sub? Will they just wind up getting denied too? Stay tuned!

UPDATE 7/18/21: Frequent nc sub contributor "Weirfish" as well as "G_F_Y_Plz" have petitioned Reddit for mod control of the Nerdcore sub. Either (or both?!) of them would probably do great. It'll be interesting to see how things play out!

I guess it's only fitting that the last "music-related" post on the Reddit sub was by... me and featured my latest nerdcore discoveries, Poverty Man and DJ McClowsky: https://www.reddit.com/r/nerdcore/comme ... _speez_dj/

Loosely related, MC Cone has started his own replacement sub, "NerdcoreV2", although it has yet to show any indication that members of the old sub are planning to make this their new mainstay: https://www.reddit.com/r/NerdcoreV2/

And finally, basically all of the former mods (- Beefy) who had previously been canned from the Nerdcore sub have started their own competing NCHH sub, although it seems to be somehow even less active and diverse than the original. The content is currently very beginner-level, which could turn away many of the bigger names. This mod crew has also exemplified on the other sub that they are kind of extreme gatekeepers (hence the remarks about anti-fascism in the old sub's 'Rules' section, that were put up immediately after they were all fired): https://www.reddit.com/r/nerdcorehiphop/ 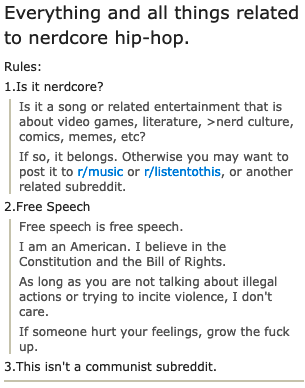 UPDATE 7/18/21: In an unprovoked move, the new nchh sub banned High-C and I, despite the fact that he only tried to contribute to their sub by posting fan artwork of prominent artists and I myself never even posted a single time. Guess old habits die hard for these guys, and seems that the mod team there is up to the same old heavy-handed shenanigans that made them lose mod privileges in the original Nerdcore sub. Bummer

Stay tuned, this post will be edited as more info becomes available. I guess we'll all have to sit back and see how this plays out...

What a sad group of individuals. It's been... [checks calendar] fifteen YEARS, and people are still on the same nonsense they were then.

I mean, at least I'm on to a different brand of nonsense.
Zombie Killa Audio Book - Part One of Six
https://soundcloud.com/the-original-hig ... lla-part-1
Top

Fer real. Btw, I see that your novella is still free, so I'll leave the post up on reddit a bit longer before cleaning things up in anticipation of my formal request for mod power.
My Soundcloud
Top
Post Reply
3 posts • Page 1 of 1